The installation Ébauche d’un nuage de pluie began with a recent research project where I asked scientists to speculate on the sound of objects and phenomena that are usually considered invisible or inaudible. Through the process of archiving these findings collected from chemists, geologists and meteorologists from different Universities in North America and Europe, one particular aspect became the foundational element of Ébauche d’un nuage de pluie. I asked meteorologists to speculate on the sound of a cloud, and by merging those responses with my personal interpretation of natural phenomena, this piece is my own speculation on the sound of a cloud, more specifically of a rain cloud. The installation consists of hundreds of porcelain “drops” hanging from a transparent lexan board. Some of the porcelain drops are attached to one of the twelve solenoïds installed on top of the board. These solenoïds are triggered at specific intervals by a microcontroller. When one solenoïd is triggered, it pulls the thread attached to one of the porcelain drops and causes it to click against the other drops surrounding it, suggesting a potential sound that could be experienced inside a rain cloud. The microcontroller is programmed in a way that the intervals between clicks are at first longer—as if it were slowly starting to rain— and progressively become shorter to suggest a cloudburst. This subtle sparkling sound of a rain cloud produced by the porcelain drops is juxtaposed with the percussive vibrations in the lexan board produced by the solenoïds triggered at specific intervals. This live sound is captured with a piezo microphone and amplified through a speaker. 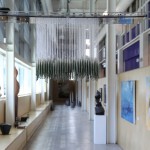 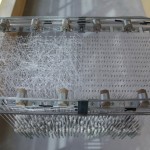 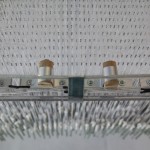 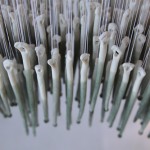 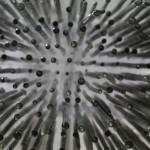 Recording of the vibrations in the lexan produced by the 12 solenoïds integrated in the sculpture, 1 minute 44 seconds, 2009.