The sculpture Léthargie took form when a dead bird was discovered outside the Kohler factory in Wisconsin, where the work was made. The dead bird was wrapped in packing tape and then molded. The wrapping process reveals the bird’s presence without exposing its details. Fixed within the wrapping material and petrified through the firing process, the bird evokes a suspended moment in time, as well as tensions between the organic and inorganic, as has been a common theme in my work in recent years. The cast wrapped bird is assembled on a cast cardboard box to simultaneously generate a new narrative that could evoke the common presence of packing material in the “landscape” of a studio or the potential shift of the object into a realm of new meanings. 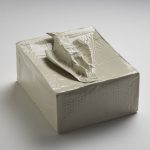 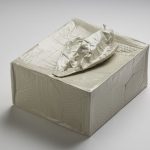 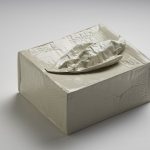 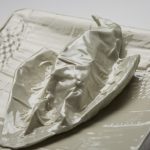